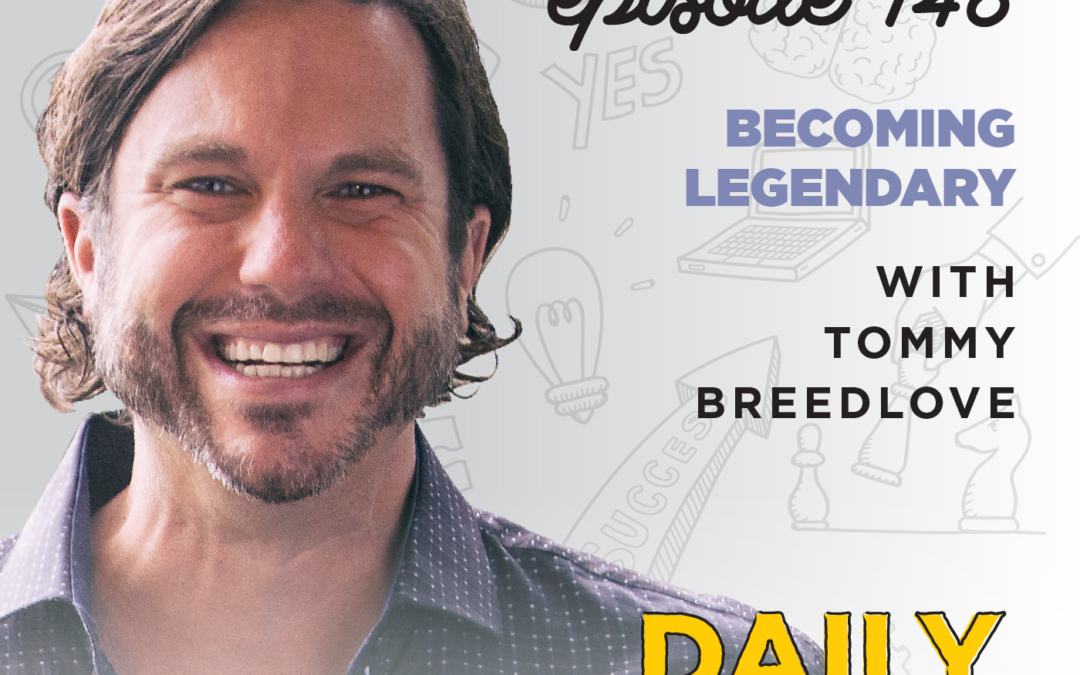 Today our expert guest is Tommy Breedlove, best-selling author of the book Legendary and an internationally-recognized business, relationship, and mindset coach. Tommy started his 20-year corporate career at one of the largest financial consulting firms in the world and eventually became a shareholder, the International Practice Leader, and a member of the board of directors for one of the largest public accounting and financial firms in the southeast U.S.

At the top of his career, Tommy experienced a transformational moment inspiring him to walk away from the corporate world to change his life and follow his true calling. Now Tommy serves clients and audiences everywhere by empowering them to build and live legendary lives.

Tommy grew up in a small town in south Atlanta where he intended to be the first person in his family to graduate from college. He grew up around a lot of violence — both inside and outside the home — and this led to him, unfortunately, becoming the violence he hoped to escape. At the age of 18, with scholarships lined up, he committed a violent crime and was, instead of four years of college, looking at seven years in prison. He ended up sentenced to two years and met the first mentor he ever had while serving that sentence.

With the guidance of that mentor, he was able to get a job at a nuclear waste container factory while putting himself through community college at night, eventually graduating from the University of Georgia and getting a job at Deloitte, one of the largest financial consulting firms in the country. Fast forward to 36-years-old at a different firm, Tommy looked like he had it all. But on the inside, he was crumbling. He woke up in the streets of downtown Atlanta wondering where his car and half of his clothes were.

This led to a journey of self-discovery, emotionally, mentally, spiritually, and physically. Through that process, he discovered who he was, what he stood for, and where he was going. By taking off all of the masks he had been hiding behind — tough guy, important guy, cool guy — and just being Tommy, the most remarkable things happened in his career and his life. His marriage became the best it ever was, his network increased exponentially, his friendships became stronger, the negative people in his life started falling away, and he advanced professionally remarkably fast. When he finally got to the top of the game, he knew there was still something bigger for him, so he decided to teach what he had learned over the last few years and channel that into mindset, relationship, business, and money coaching.

For somebody who feels like they have it all but isn’t fulfilled, how do you figure out how to find that thing that inspires you? You need to do some deep, deep work to discover your purpose and investing fully into yourself. Now is the time to start developing certain skills:

Tommy’s book, Legendary, was a three-year fistfight of trying to figure out the best way to share the message he wanted to spread to the world. And finally, it hit him: Write the playbook of simple stories and simple tactics that people can put into their life and will make a difference within 30 days of implementing in their life. It’s the same strategies that he deployed in his own life. If you can find a way to take your God-given talents and make use of them every day to make this world a better place, you will never feel like you work a day in your life.

“Are you ready to stop living your story and start living your life? If you’re not happy with where your life is now you can write the end to your story by stepping in and leaning up. It’s time to participate in your own rescue.”