152. We Are Not Doomed: How Millennials Are Moving the World | with Jared Kleinert 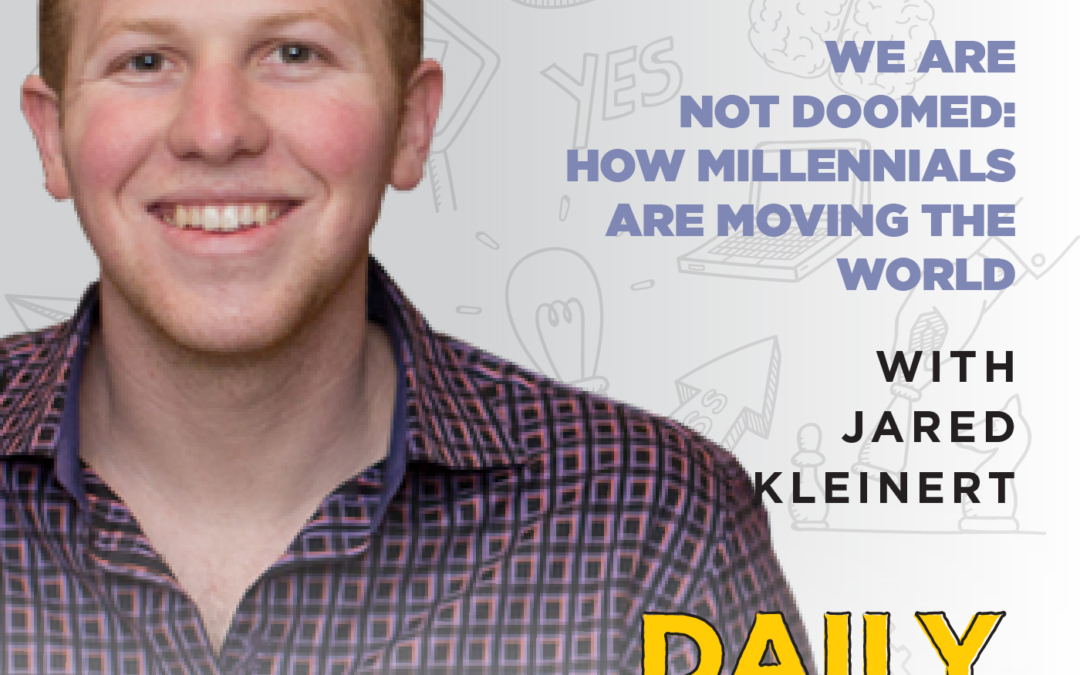 Today our expert guest is Jared Kleinert, a serial entrepreneur, TED speaker, and award-winning author who USA Today named the “most connected Millennial.” He’s also the author of 2 Billion Under 20: How Millennials Are Breaking Down Age Barriers and Changing the World. His work profiles seemingly superhuman young people who have founded companies collectively worth billions of dollars, such as WordPress, Duolingo, General Assembly, and more.

He is also a social media influencer with followings in the tens of millions, featuring film producers and leaders across diverse industries ranging from virtual reality to lunar settlements. As a highly sought-after keynote speaker and consultant, his clients include Facebook, Samsung, IBM, Cornell, Berkely, Adage, and more. His insights on entrepreneurship and networking have been featured in major media publications such as Forbes, Time, Harvard Business Review, Fortune, Entrepreneur, Fox Business, and more. He is committed to building the world’s top Millennial-led network of super connectors and subject matter experts.

Early in his career, Jared learned from some of the world’s top experts on networking and relationship building. At a company called 15Five, he was mentored by “the most connected man you don’t know in Silicon Valley,” according to Forbes. After that, he started a marketing consulting firm where his first client was Keith Ferrazzi, author of the modern-day networking classic Never Eat Alone. Between those two mentors and his work interviewing some of the world’s smartest, most talented Millennials, he became someone who was very well connected — and that became his differentiated skillset in the marketplace.

As someone who has dedicated his career to researching successful Millennials, Jared has a clear grasp of how they tend to be different in the workplace. He has noticed, at a high level, a 3-step process they have followed to achieve success in record time.

These are the three things most successful Millennial entrepreneurs are doing:

We are facing more problems today than ever before and they are growing exponentially in severity. As individuals, we have access to technology and platforms that give us abilities equal to what only governments, massive corporations, or the wealthiest individuals would have had 100 years ago. If we can come together and take advantage of the tools and technologies available to us, we can achieve incredible things and change the world.

“We all have the power now that only governments, corporations, and the uber-wealthy had just a few generations ago. If you’re listening to this and you’re wondering how to navigate through trying times and this difficult period we’re all faced with right now, then think about how you yourself can level up, upskills, whatever the phrase is you want to use. Find your passions and explore those. After you do that, then think about where you can experiment and innovate, whether that’s launching a new business, doing a different business model with your current business, now is the perfect time to experiment. If the playbook was out the window before, now we have institutions that are really hurting and we’re looking for creative solutions to all sorts of problems right now. Now is a great time to experiment, build your own network, build your own following so that if and when you stumble on something important and meaningful you have people to share those ideas with, and be open to collaborating with others because that’s where these true breakthroughs are going to come from. And if we can catalyze as many of these meetings of the minds as possible, I think we’ll all survive.”