157. Why You Should Forgive | with Derek Stone 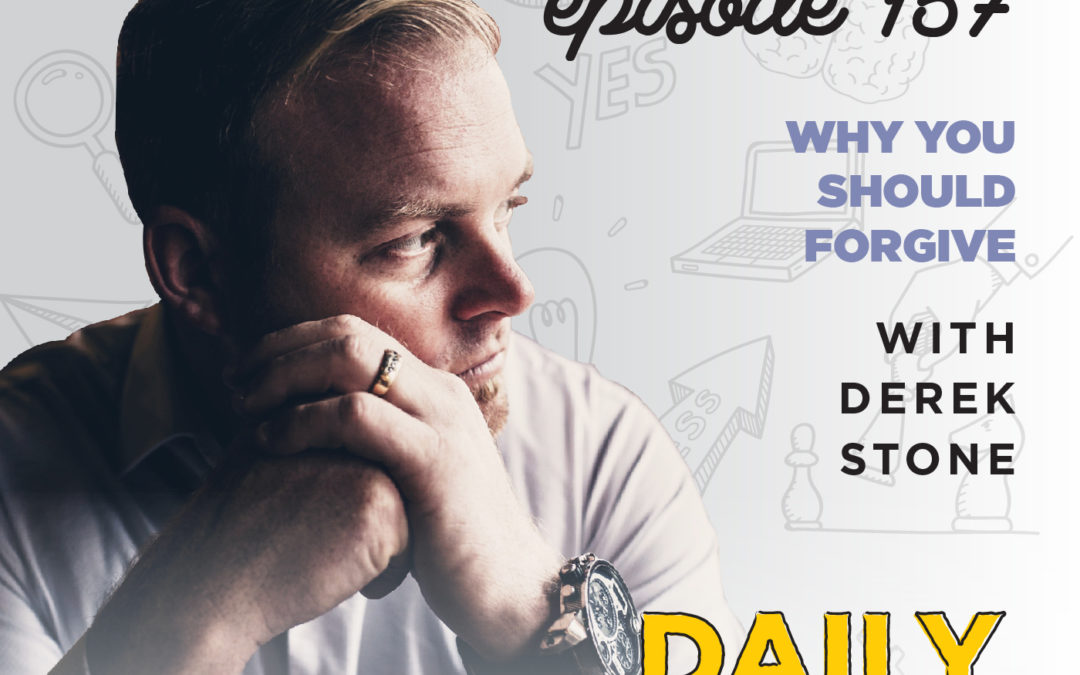 Today our expert guest is Derek Stone. After working to support his family as a struggling artist, he chose to reevaluate his life and his way of thinking. In three short years, he grew a small one-man show into a multi-million-dollar company.

When Derek’s business first hit seven figures, he tried to identify what the turning point could have been. He traced back his incredible transformation to the decision to forgive his father. He left the path of blame and began traveling down the path of forgiveness, which led him to live his best life. He is now on a mission to empower others to make similar transformations by helping them take charge of their own lives.

Derek’s childhood involved several traumas. He was sexually abused by his step-father, he didn’t know where his next meals would come from, and they often lost power or hot water due to unpaid bills. He blamed his dad because he believed it was his responsibility to protect Derek from these things.

He lived with a facade that everything was alright, but inside he was increasingly bitter. He carried that anger until he was 19, when he attended a conference called Stomping Out the Darkness, based on the book “Stomping Out the Darkness” by Neil T. Anderson and Dave Park. It was there that he confronted the idea of forgiving his dad.

David began to forgive everyone in his life that had wronged him as they came to his mind — his father, his mother, his abuser. When he was done, he didn’t feel a need to hide behind his facade anymore. He rekindled his relationship with his father, and he felt a burden lifted from him.

In 2014, David’s construction business began taking off. He found it hard to balance that work, family events, and his passion for touring as a musician. He made the decision to walk away from touring. This led to some serious depression — not because he wasn’t touring, but because he lost the platform for his message. Eventually, it came to him that he could share the message in a book: “Why Should I Forgive?”

The process of forgiveness is not easy, but it is so important to your development as a person.

Even when someone has done you real harm, forgiveness is an act you do for you. It is not a justification for what they did to you but giving yourself permission to stop holding on. It is a gift you give yourself.

“You’re not a victim. When you play the victim, you give the person who harmed you power over you. You have to get to the point where you say ‘No more. I am not a victim.’ For claiming that will disarm the power your offender has over you. You are enough. You have what it takes. I believe in you. You must believe in you. There is greatness within you and within all of us because we were created by perfection in his image. You have to participate in your own rescue, as my friend Tommy Breedlove says. Phillippians 1:6 says ‘And I am sure of this that he who began a good work will bring it to completion.’ So go. If you still have breath in your lungs, go. Go and change the world. You are going to help create the world that my kids grow up in, and their kids, and I want to leave it better than I found it. Together you and me, armed with the power that forgiveness brings to set others free, we can do this. You can do this. For whatever is your why, choose to forgive.”