211. The Universal Laws of Success with Dr. John Demartini 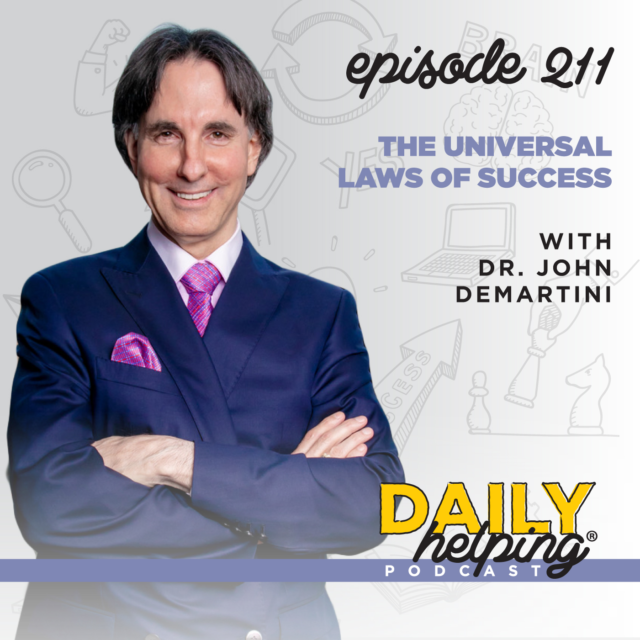 Dr. Demartini has presented to crowds of thousands and worked with entrepreneurs, board members, CEOs, managers, teams, and employees at companies including IBM, Shell, Merrill Lynch, and Maserati Ferrari. He’s also been featured in media outlets such as “O,” “Larry King Live,” “Huffington Post,” Mindvalley, “Sky News,” News.com.au, and more.

As a child, John had a speech impediment. He was told he would never be able to read, write, or learn effectively. He dropped out of school and lived as a drifter from 13 to 18. He fell in love with surfing, and managed to make his way to Hawaii where he lived under bridges, tents, and anywhere he could find a place to sleep. He surfed every day, but at 17 he almost died. A lady found him and took him to a health food store to get him some food. There, John saw a flier for a speaker, and something intuitively told him he had to go and listen. The speaker was a man named Paul C. Bryan and his speech moved John so much that he believed he could overcome his learning problems.

He returned home and began studying to try and go back to school. At first, he failed and almost gave up, but his mother saw him crying on the living room floor and told him something only a mother could: “Whether you become a great teacher and philosopher, return to Hawaii to ride the waves, or return to the streets and panhandle as a bum, your father and I will love you no matter what.” With that unconditional love, John gathered the determination to do whatever it took to master his learning disabilities.

He’s now on a mission to learn the universal principles across all disciplines that help people become the best version of themselves. There’s one principle that stands steady called “The Law of the One and the Many.” This has thousands of applications, even down to our neurology. The laws of nature are always trying to bring us back to balance.

If you prioritize your life and give yourself permission to shine – not shrink – you will be a master of your own destiny; not a victim of history.

“Everybody has a set of priorities, a set of values that they live their life by. And all of those are revolving. At any moment they’re filtering how you perceive, decide, and act. Whatever’s highest on that value list, you’re spontaneously inspired to act on that. It’s the most fulfilling. Your ontological identity revolves around it, your piscological pursuit of knowledge revolves around it, and your teleological purpose revolves around it. If you give yourself permission to prioritize your day and do the highest priority actions and fulfill what is most deeply meaningful, you will awaken your executive function which will bring you an inspired vision, help you strategically plan a pathway, make you execute the plan spontaneously, and allow you to self-govern the amygdala from its impulses and instincts that distract. If you prioritize your life and fill your day with high-priority actions that inspire you, your life won’t fill up with low-priority distractions that don’t.”

Thank you for joining us on “The Daily Helping with Dr. Shuster.” Subscribe to the show on Apple Podcasts, Stitcher, or Google Podcasts to download more food for the brain, knowledge from the experts, and tools to win at life.