217. How to Go Big in Your Life with Julia Pimsleur 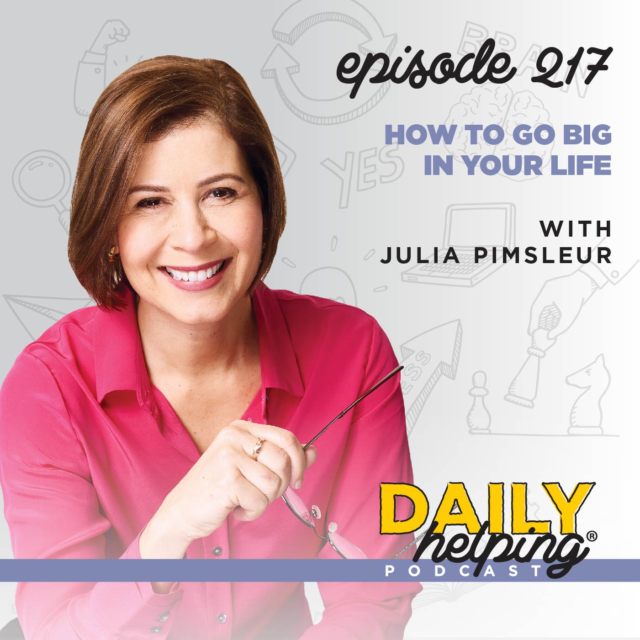 Today our expert guest is Julia Pimsleur, the author of Go Big Now and Million Dollar Women. She’s a master practitioner and coach of neurolinguistic programming and the founder of the Million Dollar Women social venture. She also grew the number-one language teaching company for kids, Little Pim, into a multi-million dollar business.

Julia has always had a passion for bringing things that were once only accessible to the few to the many. She was frustrated to see that it was often only the 1% that could afford to teach their kids a foreign language. They had enough head starts, and she wanted to make language-learning accessible to more people. Now, with her coaching, she is helping women get access to more money and more freedom.

A few years into the business, and seeing a decent amount of success, Julia started feeling stuck. The business wasn’t growing anymore. She was the primary breadwinner in her family and she needed this to grow in order to continue. She had almost thrown in the towel until she got access to coaching and mentorship which led to her developing a “Go Big Vision” that turned it into a million dollar business.

When she wrote Million Dollar Women, she shared the story of how she built Little Pim into a thriving financial success. During that process, she interviewed several women across the country who also built multi-million dollar businesses. She found that you only need three things to “go big”:

Of these three things, people struggled most with the mindset. That’s when she knew what her next focus was going to be, and she became trained as a mindset coach to train women in business. If you don’t nail your mindset, it’s going to be difficult to find success in any area of your life. She set out to write the essential guide of where to start on the journey of establishing a strong mindset. She took the top mindset teaching and boiled it down to eight essential practices.

“I want people to think about, What do I want to change in my life in order to get to my Go Big Dream, Go Big Goal, as I teach you in my book to identify a go big goal and go for it. But the quote that always comes back for me is ‘If you want something you’ve never had, you’ll need to do something you’ve never done.’ And that, to me, is the ticket. Because all of the coaches I’ve worked with were people who embraced the idea that a coach is someone who makes you do the things you don’t want to do so you can become the person you want to become, and that usually means trying some things you’ve never tried before. So, if someone listening is about to embark on a big, crazy dream or just really go for it, this is the time. You’ve decided, I’m going to make it happen. Maybe write that down on a post-it or put it up in your kitchen and think about, Yeah, some of this is gonna be hard and it’s because I want something I’ve never had so I’m going to do something I’ve never done.”