218. Your Network Is Your Greatest Asset with Dr. Ivan Misner 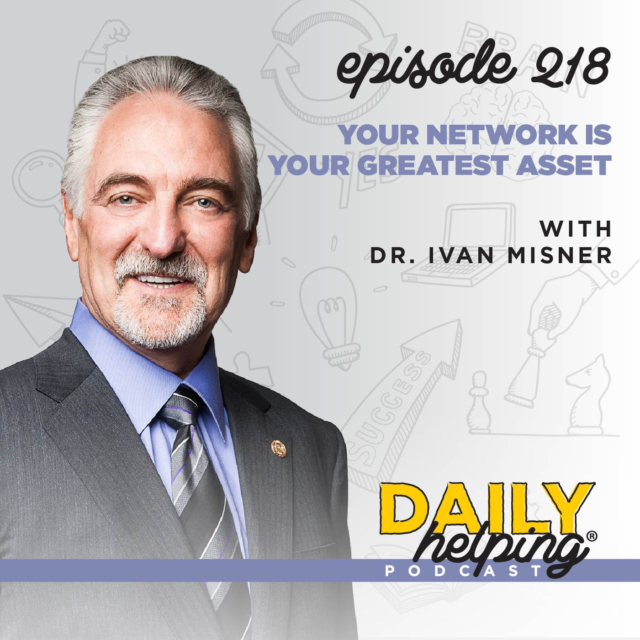 Today our expert guest is Dr. Ivan Misner, the founder and Chief Visionary Officer of BNI, the world’s largest business networking organization. Founded in 1985, the organization now has over ten thousand chapters worldwide. Last year alone, BNI generated 11.5 million referrals resulting in 16.3 billion dollars worth of business for its members.

Called “the father of networking” by both Forbes and CNN, Dr. Ivan is considered one of the world’s leading experts on business networking, and has been a keynote speaker for major corporations across the world. He’s been featured in the LA Times, Wallstreet Journal, New York Times, CNN, BBC, Today Show, and more.

Dr. Ivan wasn’t always drawn to this line of work – in fact, it didn’t come very naturally to him. In junior high school, Ivan had run for student council two years in a row and lost soundly each time. As a freshman in high school, his class was picking a student council representative and not a single person volunteered. So the teacher looked around the room and picked Ivan. The entire room groaned and, despite how hurt he felt, he knew at that moment that he would have to change people’s opinions about him. It was the point when he realized that he could be a leader, that the best way to lead is to pour into people, and that when you do, great things happen.

When Dr. Ivan and his friends needed referrals for their businesses, he put together a referral group among them where he only allowed one person per profession. When someone approached him whose profession was already spoken for, they asked him to help them set up their own group. Things snowballed from there, and within a year, one group had turned into 20.

In his recent book, Who’s in Your Room?, Ivan explored the true importance of your network. Imagine that your mind is a room with only one door, and that door only opens one way. When someone enters, they can’t leave. When you think of it that way, wouldn’t you want to be more selective about the people who you let enter? When you start being more intentional about who you let in, you are much more likely to curate the life that you want.

So how does that process begin?

Who you let into your world – your room – defines who you are and who you become. It’s time to start being more intentional about our networks and how they shape us.

“I think it’s really important for people to understand their network. Their personal network is a beacon of hope in a sea of fear. It is where you go to for support. The people in your network are the people you go to for help, for guidance, for emotional support, for referrals – obviously, in BNI, but for so much more. And people either get frozen by fear or focused by fear, and I think your network helps you get focused by the fear that is out there.”