221. Becoming a Champion in the Game of Life with Rodney Flowers 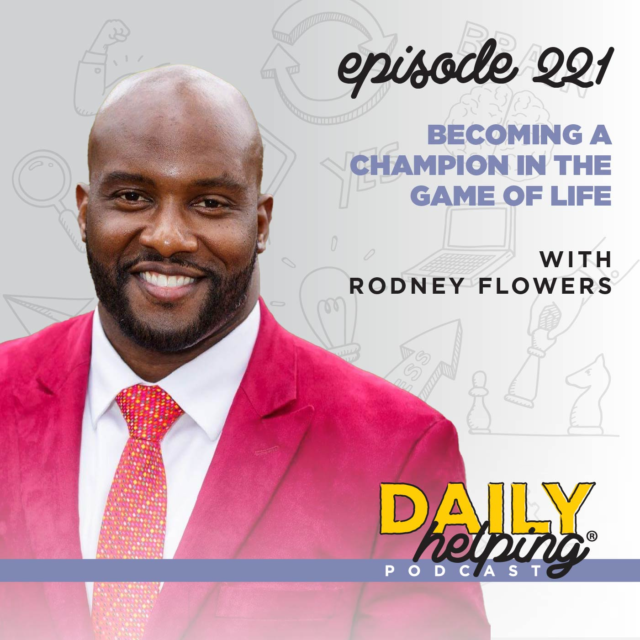 At 15 years old, Rodney loved playing football. In the first game of his sophomore season, he suffered a serious injury. He was rushed to the emergency room, where, after extensive testing, he was told he had a 92% chance of remaining paralyzed for the rest of his life. He gave up on living for over a year, where the only thing that prevented him from taking his life was the thought of the upset it would cause for others.

Eventually, he realized that the position that he was in was an opportunity. He shifted his mindset and his perception about what was happening, and started to look at the emotional pain he was feeling. He realized that his emotional pain was not because of the injury, but because his dreams had been taken away and he hadn’t found anything to replace them. So he started asking himself some questions. They all led back to one major question: “What if I could walk again?” And that became his dream, which is when things began to change. 18 years later, he was able to leave his crutches behind and walk on his own once more.

Rodney has refined a process for overcoming those obstacles. First, view challenges as opportunities. When we recognize what the challenge is exposing, therein lies the opportunity to improve. Next, start seeking out challenges – specifically selected ones that won’t hold you back, but will instead allow you to move forward. Finally, focus on your dream. Make it as real as possible. When you can envision your dream and imagine yourself there, it will make pushing through the hard times easier.

Rodney’s story is one of overcoming extreme adversity, and it’s proof that anyone can put in the effort. Even if Rodney had never walked, he would have been so much further having made the effort to do so, and that mindset shift is available to all of us. It will push us further than we could ever imagine.

“My philosophy is this: if you’re alive and breathing, you’re on the field of adversity in the game of life. It’s something that we can’t escape. Every one of us are going to feel some level of opposition and adversity in life, and perhaps you’re feeling it right now. You’re not alone, OK? It’s a privilege and a responsibility. If there’s one thing that you want to take away from this, it is that you attack that – that’s your privilege. You get to play on this field and it’s a lot of fun. Sometimes it’s painful, but yet it’s a lot of fun if you are on the attack, if you can just get out of the defense mode. It’s not fun playing defense all the time, it’s not. So play a little offense, create some things, innovate, produce, push back on the opposition, and see what you can come up with, see how far you can progress, see how much you can score, and once you find out you can score, continue that process, become a star in your own game, and eventually a champion in the game of life.”