226. Letting Go of Nothing with Peter Russell 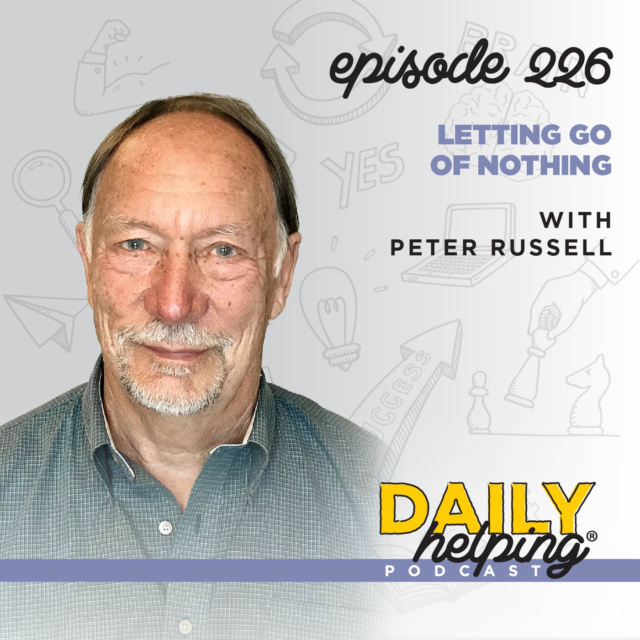 Today our expert guest is Peter Russell, author of Letting Go of Nothing and From Science to God. He has degrees in theoretical physics, psychology, and computer science at the University of Cambridge. He has both expertise and experience with meditation and Eastern philosophy as well as research in the neurophysiology of meditation. He also coined the term Global Brain with his bestselling book of the same name.

Peter became fascinated with the idea of consciousness. He was very adept at physics, but there was nothing about the world of physics that could explain why we have experiences. The only people who really explored consciousness were the yogis, monks, and spiritual adepts that looked inside themselves to find consciousness. That drew Peter into meditation, which he began studying in India. Originally growing up rejecting religion, Peter began to see that there was something to them beyond the surface-level stories that spoke to some deeper truth.

There’s been much discussion about the importance of letting go, but Peter believes that the way we view letting go is all wrong. According to him, we are not letting go of people or things, but our attachment to them – the way we see them. So when we let go, we are actually letting go of nothing.

A big part of letting go is forgiveness. When we forgive someone, we are letting go of something inside of ourselves. They may not ever know one way or the other, but by letting go of our grievance within ourselves we are able to come back to a more balanced state.

Letting go of our ego is another part. The ego is not a thing that can be overcome, but a mode of thinking that we will revisit again and again. When we let our ego drive us, we can take things that we interpret as attacks and allow them to color our relationships by driving us to be bitter or resentful . But by letting go of our egoic thoughts and realize that we all want the same thing deep down, and be on guard against those attacking thoughts to act intentionally to make others feel good.

“Take time to pause in your daily life between doing two tasks – between doing your emails and going and making a cup of coffee. We’ve already paused what we’re doing. Pause your thinking just to notice where your mind is. It may be on to the next thing you’ve got to do. And notice how it feels to pause your thinking. When we do there’s usually a sense of ease, relief, and we start noticing the present moment. Oh, there’s the sound of the wind in the trees I hadn’t noticed or the traffic noise I hadn’t noticed. By just doing that we come back to the present because our thinking is always taking us into the past or the future. If we just pause – just for a few seconds – we’re both coming back to being in the present moment, and we’re feeling better for it. We’re feeling easier.”