228. Be Honest: How Much Do You Trust Your Leaders? with Ron Carucci 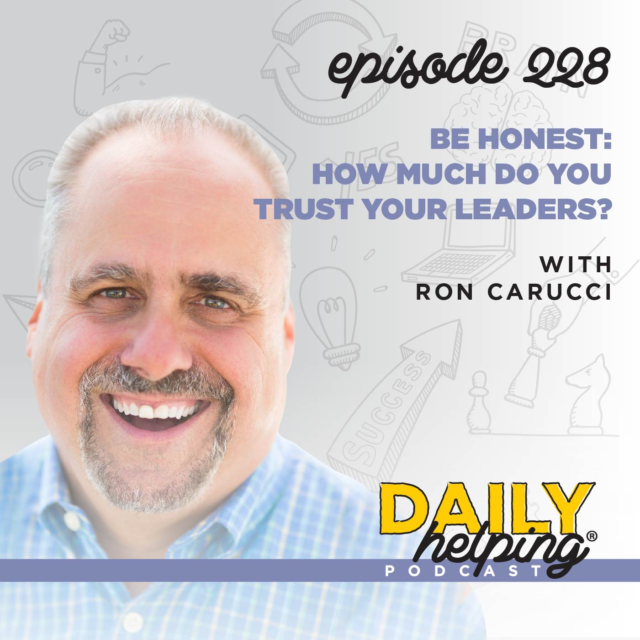 Today, our expert guest is the returning Ron Carucci, a two-time TedX speaker, bestselling author of nine books (including his most recent, To Be Honest), and a popular contributor at Harvard Business Review and Forbes.

Ron Carucci is also the co-founder and managing partner at Navalent, working with CEOs and executives pursuing transformational change for their organizations, leaders, and industries. He has a thirty year track record helping some of the world’s most influential executives tackle challenges of strategy, organization, and leadership.

In addition to his regular contributions at Harvard Business Review and Forbes, Ron has also been featured in Fortune, CEO Magazine, Business Insider, MSNBC, Business Week, Smart Business, and Thought Leaders. We feel incredibly lucky to have him here with us today, teaching us unbelievably valuable and inspiring ways to succeed in leadership.

In the last few years, our trust in leaders has been in freefall. Whether in the corporate, nonprofit, or political space, we’re all starved for truth and honesty in the people that lead us. We’re growing increasingly dissatisfied with dishonesty – and the explanations given when that dishonesty is uncovered. How can we do better?

Ron set out to study and see if we can predict under what conditions people would tell the truth, behave fairly, and serve the greater good, and what conditions would lead to people lying, cheating, and serving their own interests. If we can predict that, we can create environments where people can be their true selves, thrive, and do their best work. And he found that we can.

There are four predictors within an organization that will accurately predict whether or not people will behave:

Establishing trust within an organization is paramount to its success. It starts with the leader and it goes down to the individual employees. Each of these predictors can create a halo effect which boosts the others, so start by figuring out where you stand, sit down with your mission statement, and ask yourself and your employees “How can we live this better?” When you do that, you’re on your way to creating the right culture.