233. How to Survive a Startup with Steve Hoffman 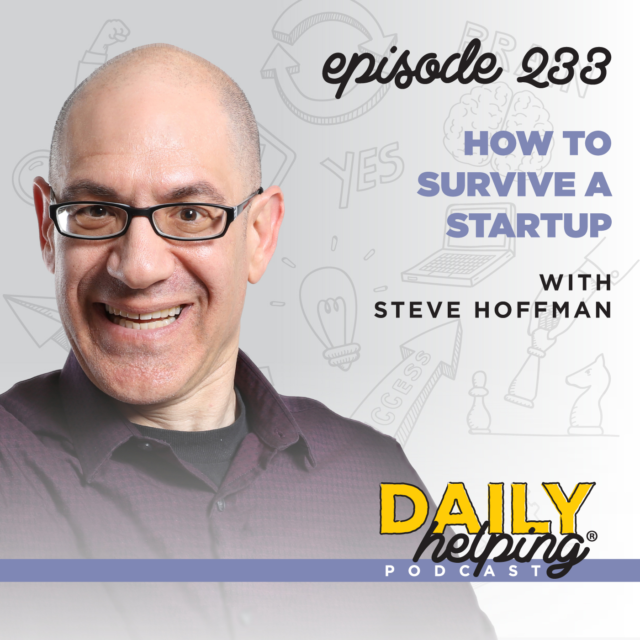 Today, our expert guest is Steve Hoffman, also known as Captain Hoff. He’s the CEO of Founders Space, one of the world’s leading startup accelerators with over 50 partners in 22 countries. Founders Space was ranked the number one incubator for overseas startups by Forbes and Entrepreneur magazine. He’s also a venture investor, serial entrepreneur, and author of several award-winning books including his latest, Surviving a Startup.

Steve is a self-described avid gamer. Through high school he made over one hundred games, including board games, role playing games, and computer games. He was also very interested in making movies. He had proficiency both in the creative arts and in the technical skills necessary to pull these off, a mix that he attributes this to his genes. His mother was an artist and his father was a rocket scientist.

Following his father’s advice to study computers, Steve went to college for electrical computer engineering, but as soon as he graduated, he realized that the other half of him was missing – so he applied to the top two film schools in the country and studied film and television at USC for graduate school.

With the dawn of the internet, he launched three web-based companies before finally feeling it was time to take a break. So, he began helping his friends who were entrepreneurs, keeping the wisdom archived on his blog. He called that blog, Founder Space.

Steve wrote Surviving a Startup to package his decades of knowledge and experience into a book that could benefit other entrepreneurs. He shares that one of the biggest mistakes an entrepreneur can make is thinking they know more than they do. Beyond that, he also offers other helpful signposts for budding entrepreneurs:

Entrepreneurship is hard enough as it is, so don’t make it any harder on yourself. Learning from the lessons of those who’ve gone before you can greatly accelerate your success.

“Understand who you are. What will really make you happy? Is it just money in the bank? Is it your relationship with your family? You have to invest in all of them. If you just invest in your business, at the expense of all your other relationships, you’re probably not going to be happy because those things will wither and die. Also, who are you? It’s okay to have a dream of being an entrepreneur, but can you handle stress well, are you very flexible? If you aren’t flexible, if you can’t handle stress, you might be better at a job that’s more routine or supporting an entrepreneur, like joining a startup a little later. This self knowledge, take the time to do this, because it will benefit you much more than almost anything else you do in life.”