242. Making Your Moonshots a Reality with Jared Yellin 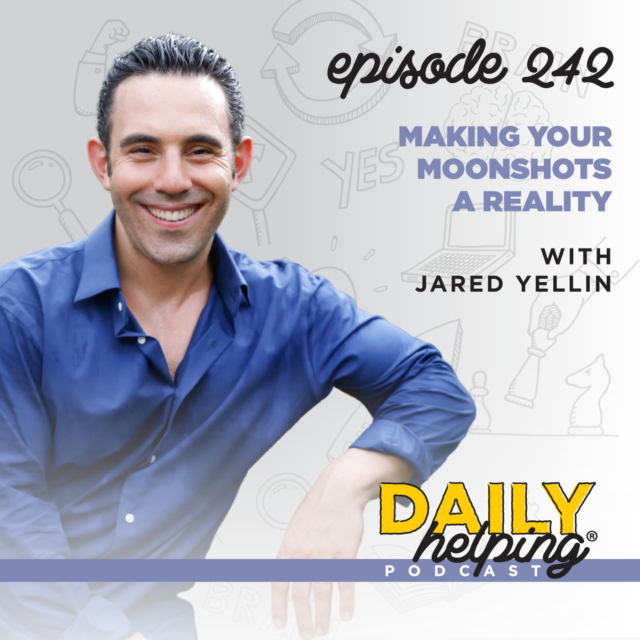 Today, our expert guest is Jared Yellin, co-founder of 10X Incubator. Jared found a way to scale his original tech company with $0 invested to serve over 40,000 paying users around the world. He declared a moonshot that he would build, scale, and sell 10,000 tech companies in 10 years. It’s a claim so large that some of the most influential people in the tech industry are yearning to play a role. 10X Incubator is going to democratize the tech industry and create a level playing field for all.

In his early twenties, Jared knew that someday he would become a dad. This led to reflecting on his own childhood. His parents had a loud, intense divorce when he was just five. He realized that, at his age, he could start making decisions that would allow him to be the dad that he wanted to be to his future kids.

When he thought about what that meant for him, one word came to mind: Freedom.

He started breaking down what freedom meant for him and he wrote down twelve different areas of freedom in life and what it would mean in each of them. But as he read all of that back, he realized that no one he knew had that kind of lifestyle. In order to achieve it, he would have to do things that nobody else he knew had done before.

Fast forward to today, Jared is thirty-seven, a father of two, and has earned the freedom that he always wanted.

In that gap, things didn’t always go smoothly. Around the same time Jared began starting the company that would go on to be his first big success, he started dating the woman who would become his wife. After a late night at the office, she told him that she felt like she was an inconvenience in his life. He knew at that moment that he had his priorities backwards and that he had to put systems in place to ensure the most important things in his life were prioritized as such.

In order to make moonshot ideas happen, all while living a life of priority, you have to do a couple of things right. First, you have to have a clear and narrow focus. You also have to be willing to take maniacal action, which means people observing you might think you’re crazy because you’re taking so much action. Through it all, you must set boundaries around what’s important. Lastly, you need to talk about what you’re doing relentlessly. When you do that, you will attention that sticks.

“The majority of potential resides in the graveyard. People die with their greatness inside because they were told they were not smart enough, or not pretty enough, or they were disadvantaged and they just believed in all of that. They have all this potential that exists within them and they don’t know where to go with it. They’re too afraid to put it out into the world because, what if it’s not well received? Instead, they play it safe, which is actually the opposite. It’s so much riskier to keep your potential within. My challenge for all of you is to execute on your potential. Just do it. Get after it.”