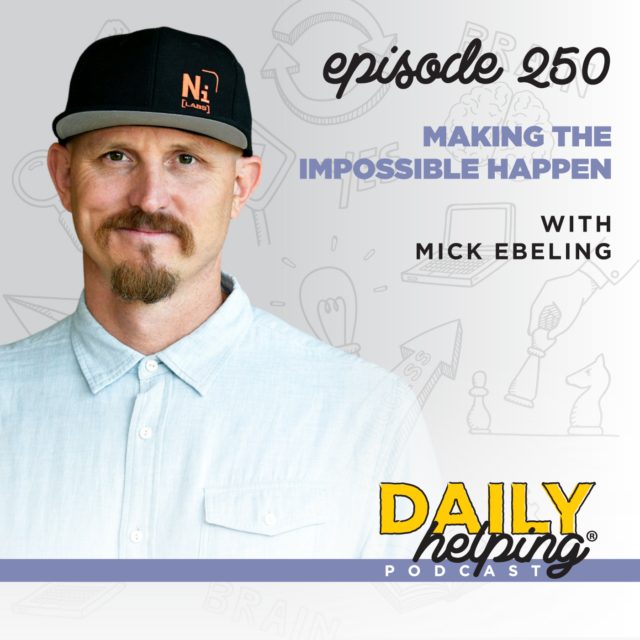 Today, our expert guest is Mick Ebeling, founder and CEO of Not Impossible Labs. Mick has seeded a movement of pragmatic, inspirational innovation as a career producer, filmmaker, and inventor.  He’s been named by Fortune Magazine as one of the Top 50 World’s Greatest Leaders and is the only person to be honored twice as TIME Magazine’s Inventor of the Year. He’s also the recipient of The Muhammad Ali Humanitarian Award and listed as one of the World’s 50 Most Influential Creative People by Ad Age.

Like most good origin stories, a series of coincidences led Mick to his main inspiration for Not Impossible Labs.

A friend convinced him to go to a gallery event; he begrudgingly went. It turned out to be a fundraising event for a graffiti artist, Tony “TEMPT ONE” Kwan, who had ALS. Mick ended up talking to Tony’s family, where he realized the event was to help raise money for Tony’s hospital bills. Only knowing the imagery of Stephen Hawking when it came to ALS, Mick was surprised to find out how difficult communicating was for Tony, and he promised to himself and Tony’s family that he would find a way to get him a communication device.

Better yet, he committed to finding a way to let Tony create art again. With some of the smartest people he knew, they invented an $80 device that allowed Tony to do just that.

It was through that experience that Mick realized what change was possible and within his grasp. He set out to create Not Impossible Labs to start changing the world and inspiring others to do the same. Now, he helps others do what he did – find one person, change their life, and change the world.

“Go out and change your world – and the world. That’s the first thing, right? Just make a decision, find an absurdity, and go out and change that absurdity and help one person. Full stop. Case closed. Shut the door. Shut the computer. Podcast over.”