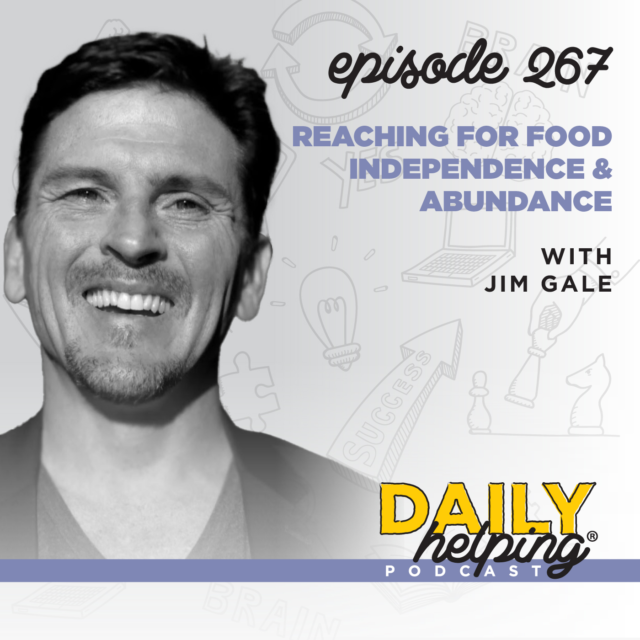 Jim Gale is a four-time All-American and National Championship wrestler who created a mortgage company that reached 1.3 billion in sales in only three years. This allowed Jim to retire early and live one of his life goals: He bought a boat, lived on the ocean for a year, and moved to Costa Rica to build eco-villages. It was there that he discovered permaculture, and this life-changing experience led him to realize that he needed to bring this to every household in the world. He started Food Forest Abundance to do just that.

Jim had never been one to set goals, but when his wrestling coach in high school gave him an ultimatum—write out your goals and hand them to me by Friday or you won’t wrestle—he knew he had to do it. But during that process, something in him changed, and he set some outlandish goals. And yet, by setting out to be the kind of person who embodies those goals, he was able to achieve them.

When his two daughters were born, Jim began to think more long-term and he looked at what he thought the world would look like for his children and grandchildren. It was then that he learned about permaculture and became certain that we are destroying our planet with our current food infrastructure. And he realized that the best path forward was to bring permaculture into everyone’s homes.

We all have the ability to take control of our own food, whether we have a huge yard or live in a tiny apartment. You may not be able to fully sustain yourself, but you can grow your own food in a gallon bucket of soil and start the process of gaining food independence.

The future of humanity starts in your mind, in your heart, and in your hands. It’s not somebody else’s job to save my life, right? It’s my duty—and it’s a joyful duty—to affect how I respond to the world in these crises that are upon us. And how do I do that best? It’s by a lot of meditation, a lot of prayer, a lot of silent time with an intention of asking for guidance, and then, from some magical place, the ideas come. And when they’re inspired ideas, they motivate. Follow your bliss, as Joseph Campbell said, and use inspired action and start becoming self-reliant, and then teach our friends and family and our neighbors and our community how we do it because it’s joyful. And that, my friends, is the solution right there.