Ep. 102: Everyone Deserves a Great Place to Work & Any Workplace Can Be Great | with Darren Virassammy 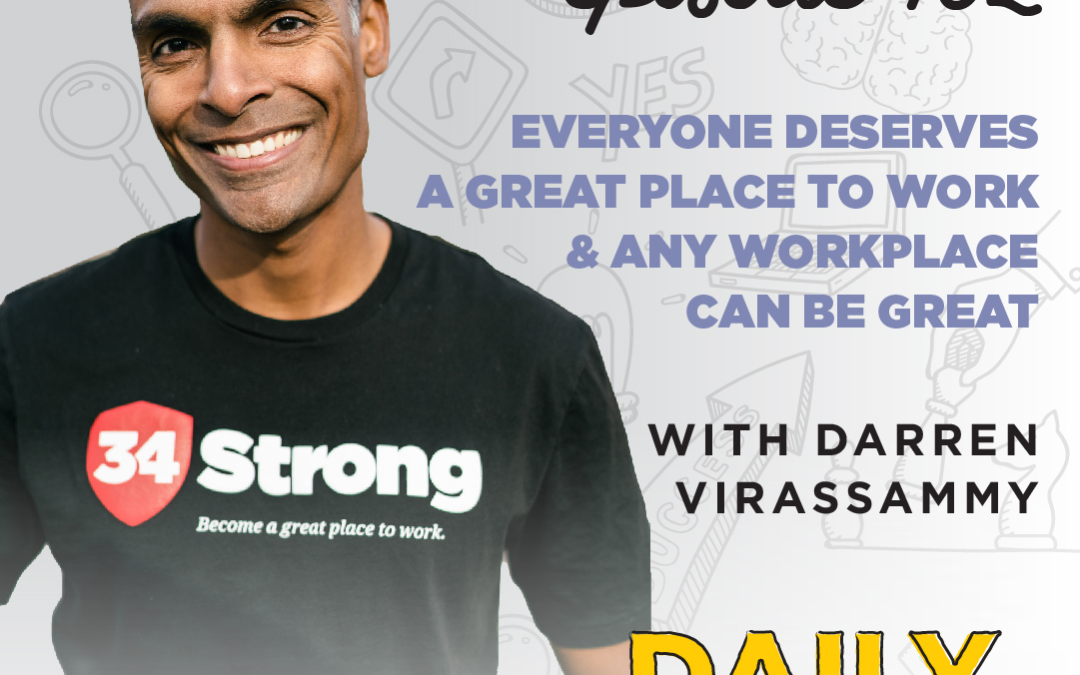 Today our expert guest is Darren Virassammy, the co-founder and Chief Operating Officer of 34 Strong, an organization that believes everyone deserves a great place to work and that any workplace can be great. A leading expert in the global employee engagement community, the 34 Strong team leverages a strength-based approach to human development to create massive shifts within organization, both culturally and on the bottom line.

Darren and his team have created sustainable organizational change in small micro businesses all the way to large organizations like the FBA, Bank of America, and California Department of Public Health.

If you’ve listened to this show before, then you know that I’m fascinated by people’s Why – and Darren discovered his Why in an incredibly powerful moment of compassion, sadness, and realization.

Darren and his wife were taking their first vacation with their baby. They were on the big island of Hawaii, sitting on their hotel balcony and overlooking a thunderstorm on the Pacific together. Darren was eating a papaya when his daughter looked up at him and laughed out loud for the first time. It was one of the most amazing – and terrifying – moments of his life.

Because, when Darren looked into his daughter’s eyes, he saw all of her potential and felt excited about getting to be her partner in growing up… but then he also saw who he was being as a father. At the time, he was gone for work more often than he was at home, and he knew he wasn’t make his family a priority.

So, Darren asked himself, who is the dad I want to be? What is the impact I want to have on the world? And what’s the message I’m going to leave behind?

Shortly after Darren started looking at his life with this new perspective, he met 34 Strong co-founder Brandon Miller. They shared a vision of changing organizational culture, and they both knew it was so important because people spend so much time at work.

But, getting back to the moment Darren discovered his Why, it’s not just about making work more enjoyable. What do you think happens when someone gets to show up to work as their best self, and they’re valued for being valuable? What happens when they go home? How are they showing up as a spouse, as a parent, as a member of their community?

The positive effects of organizational change then compound on each other throughout families and society, hopefully resulting in a legacy of cultural change for all of us and a better life for future generations.

Darren shares two quotes with us at the end of the episode.

First, after Michelangelo sculpted David, he was asked how he created it from a box of marble. Michelangelo responded, “David was always in there. I just revealed him.” And there is a David, there’s a level of brilliance, inside of all of us – but we have to do the work to reveal it.

Darren’s second quote is from jazz bassist Marcus Miller: “In life and in music, at some point, you just have to find your own voice. Because, at the end of the day, there’s nobody who can do you better than you can do you.” So take the time to invest in discovering you.

How can you afford not to live the life that you were put here to live?