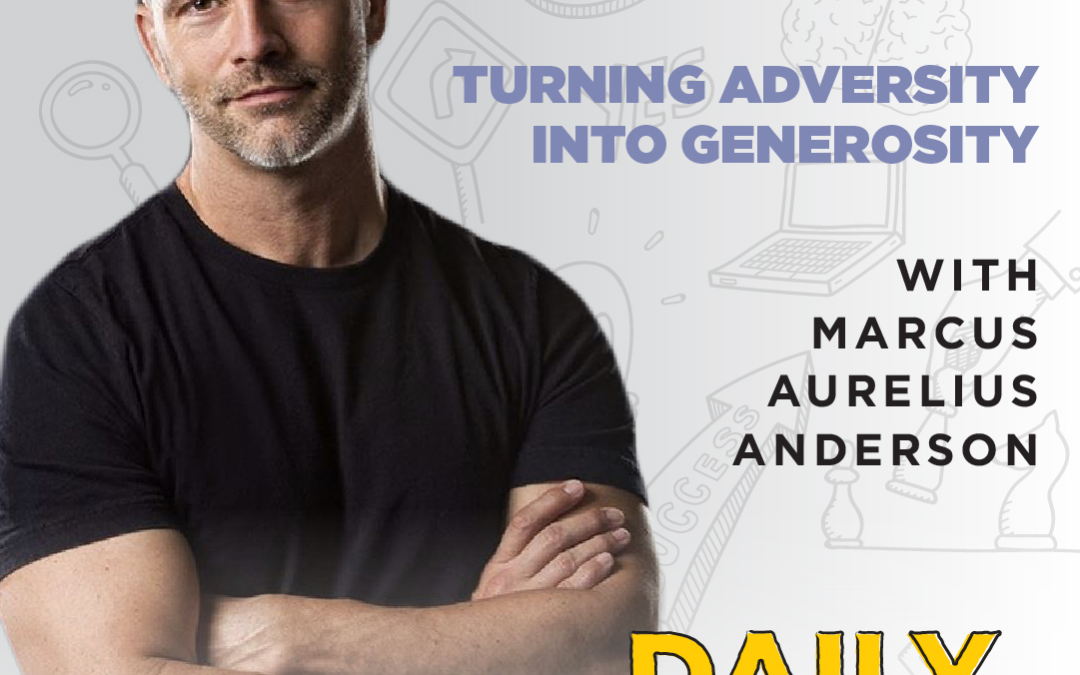 Today our expert guest is Marcus Aurelius Anderson, author of the book The Gift of Adversity, TEDx speaker, keynote speaker, U.S. army veteran, and high performance mindset coach, who works with corporations, leaders, CEOs and entrepreneurs. He speaks, writes, inspires, and coaches others to overcome their own adversities and actualize their own personal definition of success in every life area.

Marcus joined the military out of a need of service. His great uncle, who was in the Special Forces in Vietnam, was one of his biggest role models. At his funeral, Marcus realized the gravity of his uncle’s influence on the country’s establishment. He had always made excuses to not join the military, but he always had an excuse not to. Recently divorced, no kids, he decided to put his education on hold to serve in the military.

At 38 years old, he talked to the recruiter. The age limit was 35, but as he was turning to walk out, the recruiter asked him to tell him about his story. He ended up taking an entry level course, took a PT test, and the recruiter told him he’s exactly what the army is looking for. Despite having the option to work in any job they had, he chose to serve in the infantry.

Preparing for deployment, the training started to ramp up quickly. They pushed deployment back, but if they have more time, they continue to increase the intensity. In the midst of that, Marcus suffered a severe spinal injury that left him paralyzed from the neck down.

From all of the training, attrition and compression, a disc in his neck had ruptured, and when that happened, it exploded into his spinal cord. He was rushed in for an emergency operation. They were planning to remove the debris, but it became clear that even with that, recovery was not likely to happen. The doctor did not want to promise that he would ever walk again.

Marcus moved on from denial to anger very quickly. Taking away his physicality was the worst thing that could happen to him. At 40 years old, he felt like he had nothing. He wanted to take his own life, but he couldn’t even physically do it. He decided, there had to be something within this, some lessons to pull from this.

It took 3 months of anger before Marcus woke up and realized his anger was not serving him. In fact, it was holding back his ability to heal, to move on. It came back to gratitude. Acting in a grateful manner, being thankful.

Marcus thought whether there was anyone who had benefited from his injury. He decided that his injury was inevitable, and if it had happened overseas, it would have put dozens of people’s lives in harm’s way. And when he realized that, he was genuinely grateful.

A week after Marcus had that genuine, radical gratitude, feeling started to return to his left hand.

Marcus doubled down on his gratitude, he started to get feeling back in the rest of his body, and over a year and a half of physical rehabilitation, he was able to recover. The hard part was after, trying to decide how to share the message.

Getting back into martial arts helped Marcus get the rest of his physicality back. He had a private student who he was teaching martial arts to, and his student said to him “I’m getting more value from you than I am from my business coach.” After making a joke about writing him a check, he had his first client for 6 months of training.

Feeling stuck? Marcus recommends asking yourself this question: If you woke up paralyzed from the neck down, what would you wish you had accomplished with your life? Really sit with that, and let it be your call to action to be concerned about the things that really matter to you.

Learn to put your adversity into perspective. There is a lot of hardship in life. One way to be objective about it is to write it down on a piece of paper. It takes the emotion away from it and makes us look at things very logically. When you rate being stuck in a traffic jam as a 3, you realize it’s not so bad compared to most things.

We only have around 30,000 really good hours available to us. If you allow those to go by you, it is going to be difficult to have any sort of impact in your life.

“People say you don’t know what you’ve got until it’s gone. That’s not true. Everybody knows what they have, they just assume they will always have it. If there’s something you want to get done, do it now. Stop waiting, stop hesitating, stop compromising, and start taking action on it.”