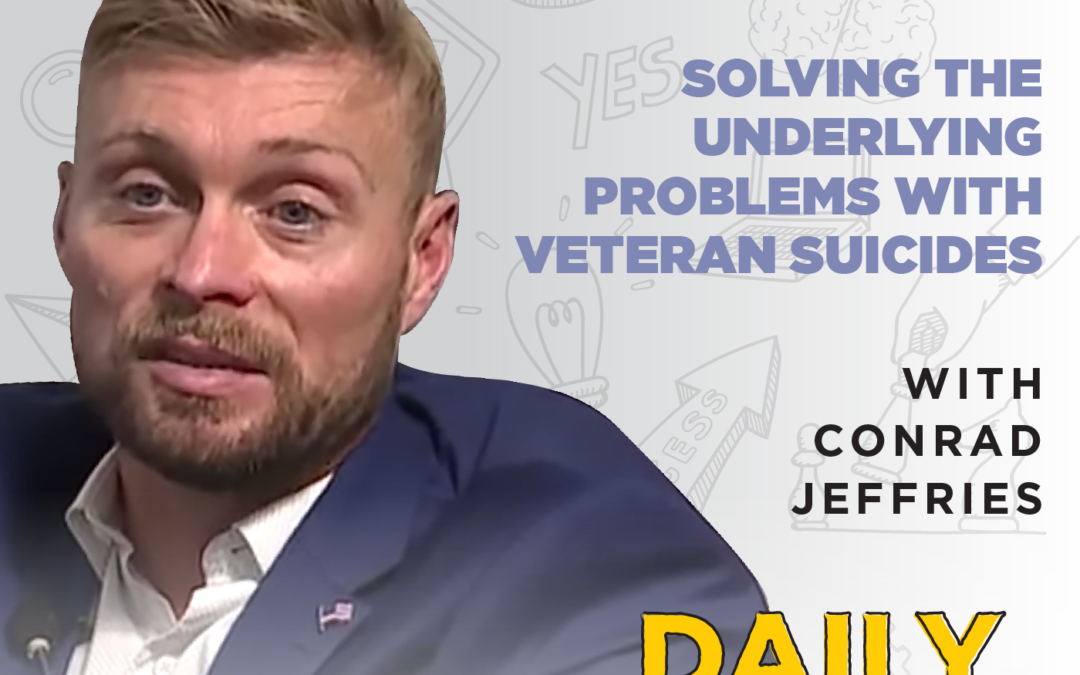 Content Warning: This episode discusses thoughts of suicide in detail. The Suicide Prevention Hotline is located in the resources below.

This is our third annual Veteran’s Day special, where we highlight a courageous veteran who is doing something extraordinary to make a difference in the lives of the people who served for the armed forces.

Today our expert guest is Conrad Jeffries, former coast guard who worked with the marine security strike team and counter-terrorism. He also served as a combat engineer for the national guard where he logged nearly 350 missions as part of a joint special ops personal security detachment team.

Everything changed for Conrad after being discharged following a DUI, which began a downward spiral for his life and ultimately led to him finding a new purpose.

Conrad grew up in a small farm town in Idaho in a strong working class community. He was very proud of the work ethic that comes out of these communities. However, he struggled with confidence in his teenage years, and when he took his first drink of alcohol at the age of 14, he found confidence in it. Slowly over time, alcohol crept into his life in other ways to deal with other emotions.

He joined the coast guard in 2001, and had managed to refrain from drinking and clean himself up. When he was surrounded by that, it elevated him as a person. But when he got out and moved home to Idaho, he started drinking again.

Conrad needed to make some money, so he joined up with the National Guard. He found more confidence in himself again, but the drinking never went away. He was performing great in the army, but when he got a DUI, all of that was thrown away.

After that, he had to accept where his life was headed. His marriage was starting to fail. He wanted to become sober and get his life back on track. He went to a rehabilitation center and started working really hard on his sobriety.

While he was there, he started the early stages for the Shot at Dawn Project. He didn’t know at the time that it was a suicide facility, but he knew there were some issues in the way discharge was handled that could be done better. It wasn’t until his own brush with suicide, after his wife had left him and his confidence issues reached an all-time low, that he saw the direction this ultimately had to take.

That is how the Shot at Dawn Project was formed. Conrad wanted to make a facility that would combat all the issues that veterans face after being discharged. They flag people early, and they try to find the underlying problems besides the substance and attacking the problems logically.

It was through his own struggles, and those he witnessed in others, that Conrad took it upon himself to create something that veterans desperately needed. He may not have wanted or expected to see this project through, but now he hopes to be an inspiration for others going through their own struggles.

“I didn’t want to own this project. I believed in the work in it so much that when people looked at it they would just get it done. I thought I could hide behind who I really was. But this journey has broken me so many times, that I’m going to finish this project. I’m going to set a standard for every veteran. You can be convicted of a crime, you can be left by the person you love, you can lose it all financially, and you can come back. So now I own this project and who I am in my past, and I know that by doing that I’m going to help guys become better.”