129. Hiring the Right Freelancers to Build Your Business | with Nathan Hirsch 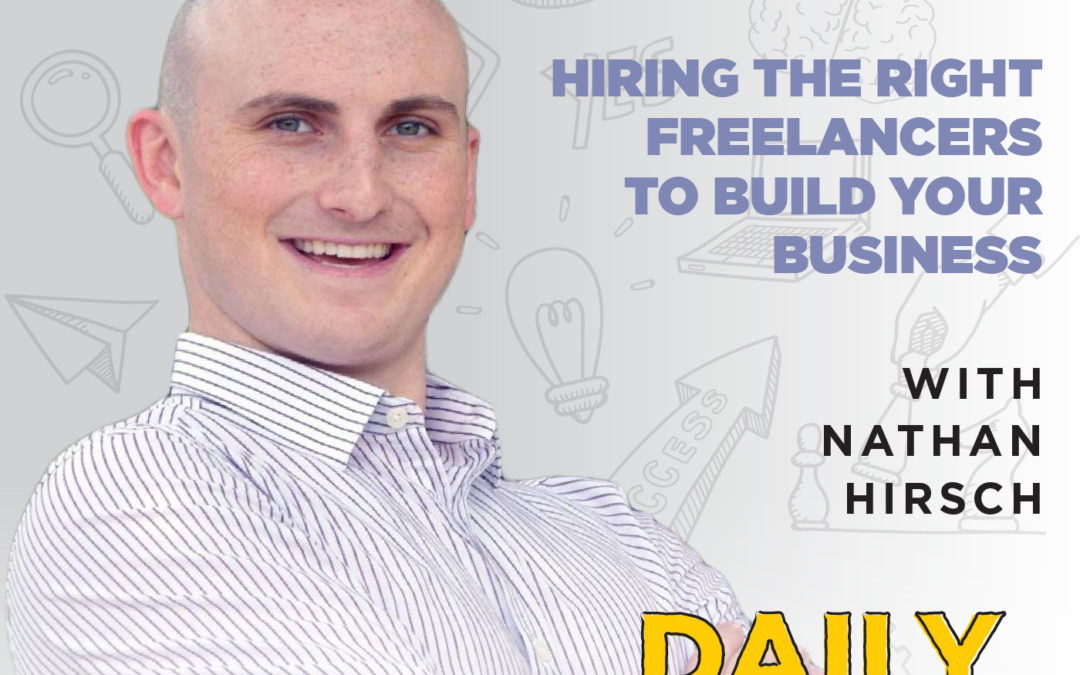 Today our expert guest is Nathan Hirsch, a 30 year entrepreneur of 10 years and an expert in remote hiring and ecommerce. He started his first ecommerce business out of his dorm room, and now he’s the cofounder of FreeeUp.com, a marketplace that connects businesses with pre-vetted virtual assistants, freelancers, and agencies in ecommerce, digital marketing and much more. He regularly appears on leading podcasts such as Entrepreneur on Fire, and speaks at live events about online hiring tactics.

Nathan’s parents were both teachers, so he grew up with the mentality that he would go to school, get good grades, graduate from college, get a good job and then retire in 30 years. They raised him with a sense of good work ethic, so from the age he could legally work he had a full time job.

He learned a lot about business, marketing and customer service, which was great. But he also quickly realized that he hated working for other people. When he got to college, he saw this as his chance to start his own business before entering the real world.

Nathan had an experience many college students know well: you buy brand new text books for hundreds of dollars, and sell them back at the end of the semester for a small fraction of that. He thought, “I can do this better.” He started buying people’s textbooks and reselling them on other platforms (including Amazon.com). This took off so well that he eventually received a cease and desist letter from his college.

He didn’t want to get kicked out of school, so he pivoted. He was excited about what he had already managed to build, so he just had to figure out what else he could sell. He experimented with a ton of different products he was interested in but nothing else was gaining traction. It wasn’t until he branched out and found the baby product industry that he started to see some success.

Nathan started to get job offers, and he was faced with making a decision: do you take the safe bet and accept a job with stable pay and benefits, or do you take the risk of entrepreneurship? Eventually he came to the conclusion that he was young, and those jobs wouldn’t suddenly disappear. If he was going to take this leap, this was the best opportunity to do that.

He was spending a lot of time hiring people through other freelancer platforms like Fiverr and UpWork, but he thought he could build a better platform that worked better for people like him. As Amazon drop-shipping got more competitive, sales began to stagnate, so Nathan built up FreeeUp on the side. Eventually that brought in more money than his Amazon business, and he decided to take it full time.

Freelancing is going to be a huge part of our workplace in the future, and whether you’re a business owner or an employee, you are going to need to learn to adapt to that. When you’re looking for people to work with, you need to make sure you know what you need:

-Do you have the systems in place that you need people to operate in? You need a follower, someone who can follow that process.

-Do you need someone to establish a process for you, strategize, and consult? Then you need an expert.

Once you’ve figured out what you need, you can hire the right person for the task.

“Diversify across hiring. I see so many entrepreneurs who make a bunch of bad hires, and then they finally find somebody they like and they just load that person up with everything, and they don’t realize how risky that makes your business. Just like you would diversify your revenue streams and diversify your suppliers, make sure you’re diversifying your hires as well.”